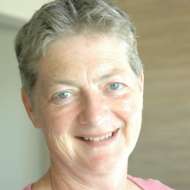 Penny McDonald
Penny specialises in working with people in the performing arts and for the past 22 years has taught in a private practice as well as many performing arts institutions.
This user account status is Approved
About About
Posts Posts
Comments Comments

This user has not added any information to their profile yet.

Penny McDonald first began having Alexander Technique lessons in early 1980s . In June 1996 she completed the three year training course to teach the Alexander Technique. Since then she has taught in a private practice as well as teaching the technique at 16th Street Actors Studio, the Australian National Academy of Music, Howard Fine Actors Studio, the Alexander Teacher Training Course, Victorian College of the Arts, and the National Drama School, Brave Studios, Film and TV International, and The Space. She has run many workshops and can come to your workplace or rehearsal.

Penny specialises in working with people involved in the performing arts. She is constantly delighted by the change performers can bring to their work by using the Alexander Technique and how great and happy they become, it is so exciting when a performer finishes performing and can say “that felt good”.

I first had Alexander Technique lessons when I was working as an actor in a street theater company. This work was very demanding physically an on the voice. After Alexander Lessons I found everything became easier, I felt lighter and my voice carried further and with no strain. I have found over the years that I respond well to stressful situations and am generally very happy.

I work day times, evenings and weekends. I am also available to run workshops at your workplace, rehearsal or school